My name is Jared Hall and I’m a U.S. based software developer living in Arizona. My current job has me building web sites and applications using C# and ASP.NET. I also build web based interactive educational activities using HTML5, JavaScript, and CSS occasionally using frameworks such as Angular and Twitter’s Bootstrap.

Java based midi video switcher. VLC Media Player is required to use this application. Using a midi device such as a KORG nanoPad you can use this to switch between selected videos. This application makes use of the following libraries: GitHub Repositiory: https://github.com/jaredhall05/Video-Machine

This game was created for the Gamma 4 one button game competition. Production on this game lasted for two months and I worked as the sole programmer on the project. This game was built to run on Windows and the XBOX 360 using Microsoft’s XNA framework and using Farseer for the physics engine.

You can view the opening cinematic on YouTube: https://www.youtube.com/watch?v=wiI6wud_C_4

This game was created for the US Imagine Cup 2010 and Imagine Cup 2010. We were able to advance into the semi-finals of both competitions with this game. This is a competitive spelling game designed to help players around the world improve their spelling skills in a simple but competitive game. The game features three languages: English, Spanish, and Hindi. In the single player practice mode if players are unable to find a word to spell the game can provide them with a spoken word that they can spell using their available letters (currently only available in English). Production on this game lasted for five months, and I worked as one of three programmers on a team of four. 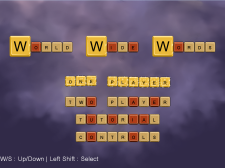